These small, almost invisible ghost ants, are usually seen in the kitchen.

The ghost ant is very adaptable in its nesting habits. They nest easily outdoors or indoors. Colonies can be medium to large in size and contain many breeding females. Ghost Ant sites include tufts of dead but temporarily wet grasses, plant stems, and cavities under debris in rapidly changing open habitats. Indoors, the ants colonize the void in the wall or the spaces between cabinets and baseboards. It will also nest in potted plants. Therefore, colonies divide into subunits that occupy different nesting sites and exchange individuals along the scent trails. Ghost ants opportunistically nest in places that sometimes only remain habitable for a few days or weeks.

Several queens can be dispersed in several sub-colonies. Nesting usually occurs in disturbed areas, in pots, underground objects, under loose bark, and at the base of palm fronds. Indoors, the ant nests in small spaces such as crevices, spaces between books, or holes in walls. Food collectors inside often come from outside. It is a very common indoor pest.

New ghost ant colonies are likely to form by budding. This occurs when one or more breeding females, accompanied by several workers and possibly a young, leave an established colony for a new nesting site. There does not appear to be any infighting between members of different colonies or nests.

Workers have a habit of running quickly and erratically when disturbed. They love molasses and take care of molasses excreting insects. They also feed on living and dead insects. When workers are lagging behind, their movement is slower and more deliberate. After close inspection, some workers can be seen dragged along with cubs. They will enter structures from nests close to foundations or from plants in contact with the building.

Tracking down their source is important and a Professional Pest Control Company can assist. 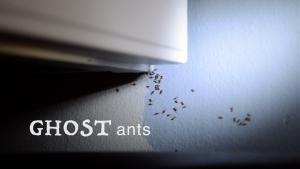 Ghost Ants are often hard to see due to their light color and extremely small size. These ants are usually active during around sunrise and sunset but, they can appear at any time of day so, if you suspect an infestation is present, keep your eyes peeled.They will create a trail into the home and nest. It’s sometime hard to determine where that nest is located but, if the trail is located, the best way to treat them is with bait traps placed inside the home near the nest. Treating the trail they are using is also very important. While ghost ants don’t actually bite, they can carry various types of bacteria so, it’s a good idea to rid you home of them once discovered.